When Humanity and Divinity Collide 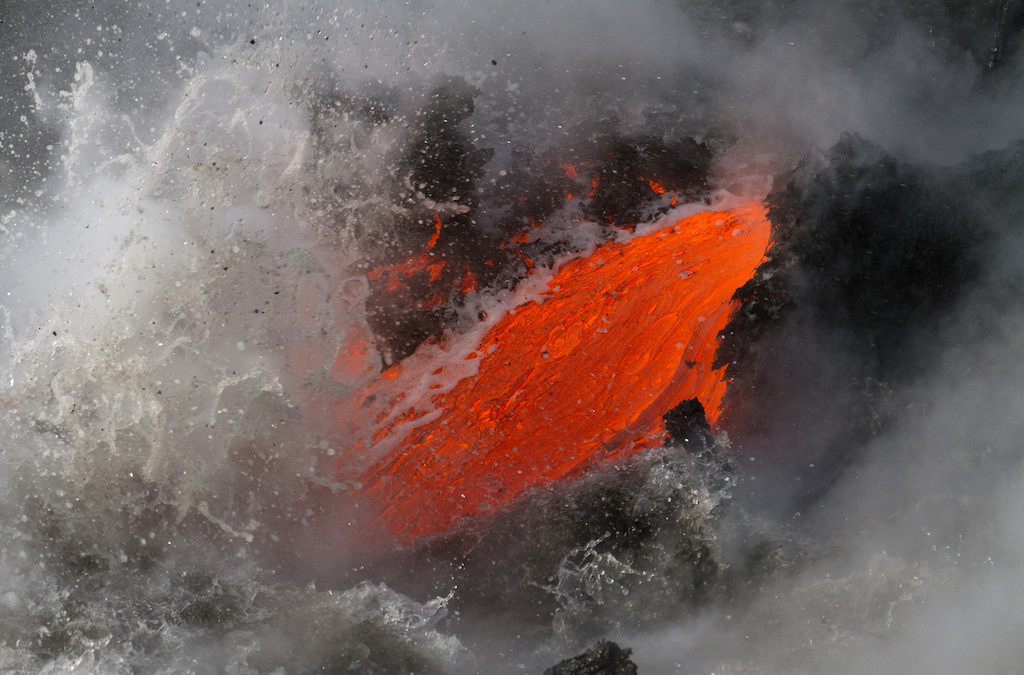 Since this is the very first blog post I am writing under the new header of “Caffeine for the Soul”, I thought I’d share a bit about where this juxtaposition of the sacred and the profane that permeates my work first started to appear in my consciousness…

In August of 1990, I was doing a Tony Robbins certification program on the Big Island in Hawaii. Despite the relentless pace of the training, often going until one or two in the morning, I was somehow cajoled into driving a group of rambunctious Australians for a sunrise hike over the lava fields of the Kilauea volcano. We set out around 4am, and after numerous twisted ankles and bruised knees, we’d covered enough of the uneven ground to see a glowing amber river in the distance. Buoyed by the sight, we picked up our pace and soon found ourselves facing a scene that I will never forget.

We had reached the point where the river of lava fell off the edge of a hundred foot cliff into the sea. Every minute or so a new batch of waves came smashing into the walls of the cliff, and where water met fire, pillars of steam rose up out of the sea. As the sun rose behind the scene the sky filled with color, and all of us sat in awe at the raw beauty and power we were witnessing. Albert Einstein once said “To sense that behind anything that can be experienced there is something that our mind cannot grasp and whose beauty and sublimity reaches us only indirectly and as a feeble reflection, this is religiousness. In this sense, I am religious.” On that moment of that morning of that day, all of us were religious, regardless of our cultural upbringing or personal beliefs.

That image often comes to mind when I think about the human potential. There is an invisible river of energy that runs through us at all times. We can call it the life force – ki, chi, mana, prana – in the words of Merriam-Webster “a spiritual force that is held to emanate from or give animation to living beings.” Like the river of lava, it carries on in its tireless movement towards the sea regardless of whether or not it is being witnessed. It flows when we are warmed and “lit up” by its light; it flows when we are blind to or even ignorant of its presence.

Similarly, we have a mind and will that can at times seem as indomitable and powerful as the ocean. While our personal power ebbs and flows like the rise and fall of the tide,there is something quite magnificent about seeing an athlete squeeze one last burst of speed or strength from their body or a leader driving their team on to victory through nothing more than the will to win.

Yet no matter the beauty and power of spirit or the determination and strength of will, the most magnificent moments in life seem to occur when humanity and divinity collide. We dig deep in ourselves to make the leap; once in the air, something beyond our own strength and power lifts us higher and carries us forward. We allow our body to be harnessed by the deeper river of energy and we surpass our previous best. We let the creative river flow through our practiced skills and great art is created. We allow our personal intellect to be yoked to the impersonal intelligence behind life and breakthroughs in science or medicine or business occur.

In her wonderful TED talk on “Your Elusive Creative Genius”, Elizabeth Gilbert shared the following story:

Centuries ago in the deserts of North Africa, people used to gather for these moonlight dances of sacred dance and music that would go on for hours and hours, until dawn.They were always magnificent, because the dancers were professionals and they were terrific, right? But every once in a while, very rarely, something would happen, and one of these performers would actually become transcendent. And I know you know what I’m talking about, because I know you’ve all seen, at some point in your life, a performance like this. It was like time would stop, and the dancer would sort of step through some kind of portal and he wasn’t doing anything different than he had ever done, 1,000 nights before, but everything would align. And all of a sudden, he would no longer appear to be merely human. He would be lit from within, and lit from below and all lit up on fire with divinity.

And when this happened, back then, people knew it for what it was, you know, they called it by its name.They would put their hands together and they would start to chant, “Allah, Allah, Allah, God, God, God.”That’s God, you know. Curious historical footnote: when the Moors invaded southern Spain, they took this custom with them and the pronunciation changed over the centuries from “Allah, Allah, Allah,” to “Olé, olé, olé,” which you still hear in bullfights and in flamenco dances. In Spain, when a performer has done something impossible and magic, “Allah, olé, olé, Allah, magnificent, bravo,” incomprehensible, there it is — a glimpse of God.

In spiritual writing, this marriage of sense and soul is sometimes called “the radiant mind” – that space where the oneness of life is localized in the separateness of the individual – the divine energy brings the human golem to life, and what gets created is somehow far more than the sum of its parts. In more practical terms, we rest in the peace of God while engaging in the pleasures of the flesh – enjoying both peace of mind and a nice piece of real estate overlooking the sea.

This is, for me, the point of creation – where the water of life meets the fire of spirit, and something never before seen comes into the world. It is the moment when the formless becomes form and something new emerges from the fertile void. When we dance between the spiritual and the material, we experience the best of both worlds. We are neither disembodied spirits attempting to avoid the bumps and bruises of life in a body nor hopeless creatures made of clay all alone in a bleak and unforgiving landscape. We become the fulfillment of Teillard de Chardin’s dictum that “we are spiritual beings having a human experience”, not avoiding one.

It is my fondest hope that I continue to see more about this in my life and that my work continues to illuminate this theme in the weeks and months and years to come:

To wake people up to both their humanity and divinity, providing rest for weary minds and caffeine for the soul.

The ‘X’ Factor in Predicting the Future